Helen Mirren
Home›Helen Mirren›RICHARD LITTLEJOHN: This witch hunt proves that there is nothing more ridiculous than the political class

RICHARD LITTLEJOHN: This witch hunt proves that there is nothing more ridiculous than the political class

Filmed from behind in black silhouette, the young woman remembers all the horror of her night of shame. “There were about 30 people if not more in the room… some people on each other’s lap.”

The earnest interviewer can barely contain her disgust. ‘People were sitting on each other’s lap?’

How many times has this vulnerable woman been subjected to these degrading ordeals?

“They were every week.”

Other victims, their testimonies expressed by actors, spoke of their involvement. “We started drinking in the basement…there were people dancing. Some spent the night there.

They were misled by older, evil men, including a character from Mr Big who lived in the upstairs apartment. And although they believed they were doing nothing wrong, they now found themselves blamed for the drunken debauchery while the real culprits got away unscathed.

For the casual observer, it could have been an exclusive TV investigation into the Rotherham child abuse scandal, or one of those Netflix-style true-crime documentaries about sex trafficking.

“They are presenting No. 10 Downing Street under Johnson as if it were the British headquarters of the Branch Davidian in Waco, Texas under cult leader David Koresh”

But no, it was a BBC Panorama special about what has become known as Partygate, illicit ‘gatherings’ in Downing Street during the Covid lockdowns.

The presenter/interviewer was outgoing political editor Laura Kuenssberg, soon to take over on Sunday mornings from Andrew Marr, who defected to commercial radio to “reclaim his own voice”.

Clearly from Tuesday night’s Panorama, Kuenssberg has already rediscovered his own voice. If you watched it to the end – which I did so you didn’t have to – Laura would have left you in no doubt that she believes Boris is guilty of sin.

But it’s worth checking out the short trailer the BBC posted on social media to publicize the program. Never mind Andy Marr MkII, Laura appears to be auditioning for the role of glamorous DCI Jane Tennison, Helen Mirren‘s trailblazing detective, in a modern remake of Prime Suspect.

I’m ready for my close-up now…

These days, he’s reduced to investigating who ate all the crisps and drank prosecco at No 10, in violation of social distancing rules. 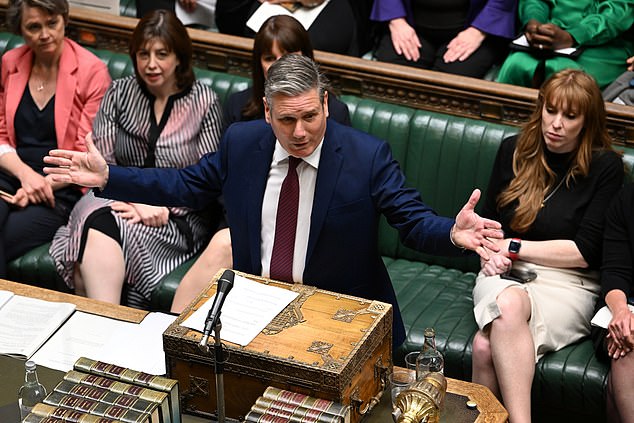 “As for Keir Starmer, it is not credible to hear him calling for Boris to resign when the Labor leader and his deputy Gobby are also under police investigation after being caught in the act misdemeanor at a beer and biriani night in Durham”

In a desperate attempt to portray this exaggerated prank as an unprecedented political scandal, he is reduced to using absurd television techniques such as treating junior officials, caught gorging themselves on Pinot Collapso after hours, in the same way. than kidnap victims who have been locked in a basement for five years.

Kuenssberg is by no means the only broadcaster to blow Partygate out of all reasonable proportion. Helicopter jamming news channels turned austere, staring bonkers in their determination to get Boris.

They present No. 10 Downing Street under Johnson as if it were the British headquarters of the Branch Davidian in Waco, Texas under cult leader David Koresh.

Sky, which was once quite impartial in its coverage of politics, is even worse than the BBC these days when it comes to anti-Tory hysteria.

“When are you going to resign, Prime Minister? is the constant chorus of Sky’s Sam Coates songbook, screaming across the road like an escaped madman warning that the end of the world is near.

Do these people really expect the Prime Minister to break his official commitments to walk around and say, ‘You’re absolutely right, Sam. You’ve got me on track. I’m a complete disgrace and intend to plug it in immediately.

And you have to wonder where Sky’s gorgeous, sulky political editor Eleanor Rigby has the nerve to cross-examine Boris on Partygate, given that she herself has been suspended from her job for six months – with presenter Kay Burley — for breaking lockdown rules at, uh, Burley’s birthday party. 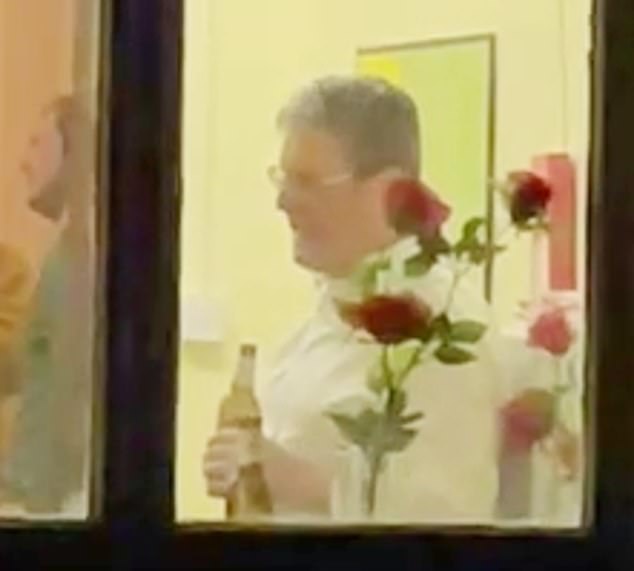 “If Boris lied, how would you classify Starmer dishonestly claiming for months that Angela Rayner was not in Durham until a cellphone video proved the exact opposite?”

So Boris was right to pop Rigby when she tried to monopolize his press conference yesterday afternoon.

The Boys (And Girls) In The Bubble aren’t entirely to blame for this tedious eating binge in a glass of wine. They just reflect the cabin fever that has infected virtually everyone in Westminster to the exclusion of virtually everything else.

To paraphrase the 19th-century Whig MP and historian Thomas Babington Macauley: There is no sight so ridiculous as the British political class in one of its periodic crises of morality.

Over the past six months, much of The Bubble has been convulsed in a demented campaign to force the Prime Minister to resign. They will grab any piece, no matter how insignificant, to advance the prosecution’s case. Their latest bet is to prove Boris lied to the House. Is he a liar? Don’t ask me, ask his ex-wives or anyone who has ever worked with him.

Let’s just say that, in the words of another serial conservative swordsman, Alan Clark, Boris tends to be “economical with the news”. Granted, he always had the ability to paint himself into a corner and then step on the paint.

His paint-splattered footprints are all over Westminster. But, frankly, I’m not convinced he lied to the Commons, despite the hysteria in the House yesterday.

He may have given a generous interpretation of the facts, but was he lying? As they say in Scotland, not proven. When it comes to Partygate, I’m willing to give them the benefit of the doubt.

For the record, the idea that there was one rule for us during lockdown and another for them, which caused the rules to stick in the throat. 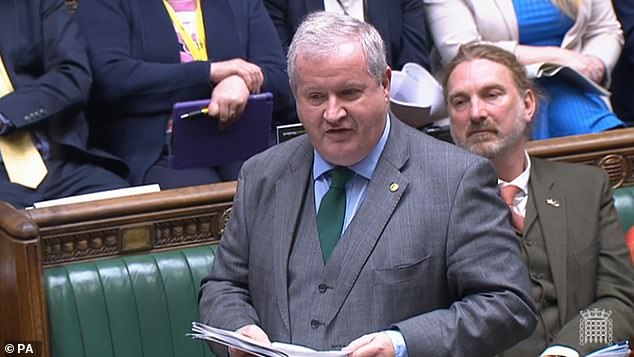 But so do the shroud-waving hypocrites who argue the Prime Minister was indifferent to the suffering caused by the Covid restrictions. They tend to forget that Boris himself nearly died. He also lost his mother during the pandemic.

What is deliberately overlooked is that the Prime Minister actually lives and works at No. 10, a building he shares with hundreds of civil servants. I believe him when he says he only came briefly to a few “gatherings” where we had drinks after work, especially to say bon voyage to a departing loved one.

Earlier this year I compared Boris to Young Mr Grace in Are You Being Served? I can just imagine him making an appearance to boost morale during a staff departure, with Carrie on his arm in a skimpy nurse’s uniform, and telling his troops, “You’ve all done very well…” before to go upstairs for tiffin.

Admittedly, Sue Gray’s long-awaited 37-page report contained no silver bullet. The “killer” photos weren’t convincing, to say the least. In none of them does Boris actually drink.

And the idea that any of these “gatherings” amounted to a party is absurd.

With their cardboard sandwiches and budget vino, they looked like the end of a Friday afternoon session at a sales conference at an Alan Partridge hotel. If it was a party, you can only conclude that Boris is not capable of organizing a proverbial drinking party in a brasserie.

Especially coming from a man who seems no stranger to the all-you-can-eat buffet. Can Blackford, hand on heart, guarantee that at no time during lockdown was he tempted to scoff at a second mutton pie or raid the mini bar at the end of a “work meeting” on Indyref 2?

The same goes for Scotland Yard’s prosecco team, which imposed 126 fixed fines. During Covid, could they assure us under oath that they never opened a bottle of Glenhoddle from the filing cabinet at the end of a successful operation?

As for Keir Starmer, he defies credibility to hear him call for the resignation of Boris while the Labor leader and his deputy Gobby are also the subject of a police investigation, after being caught red-handed during a beer and biriani night out in Durham.

Starmer talked endlessly about Partygate, knowing full well that he, too, had an elephantine lock skeleton in his closet. His brazen attempt to claim moral superiority is nauseating.

And if Boris lied, how would you classify Starmer dishonestly claiming for months that Angela Rayner wasn’t in Durham until a cellphone video proved the exact opposite? Any half-decent lawyer would tear him to pieces on the witness stand. 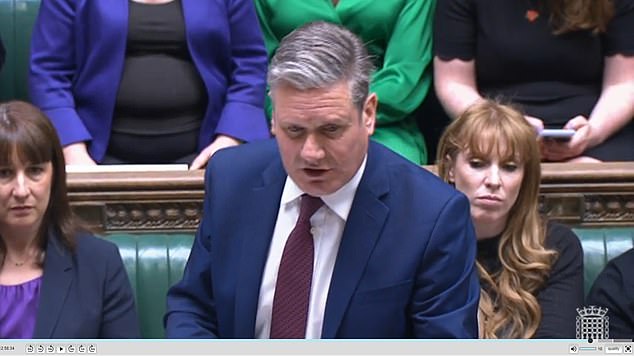 “Starmer talked endlessly about Partygate, knowing full well he too had an elephantine lock skeleton in his closet”

Starmer proved once again yesterday that his fabricated outrage is simply meant to cover up the fact that he has no answers to any of the big questions facing the country.

He delivered his attack on Boris with all the panache of an I Speak Your Weight machine. There is no account for the treacherous and embittered remnants of the continuity calling for the Prime Minister’s head.

But the wobbly Red Wall Tories must be reminded that most of them owe their seats to Boris and there remains their best chance of keeping them.

They should give him some slack and get behind the government. Voters have long made up their minds about Partygate.

They will judge Boris at the polls, not just on whether he ate a slice of birthday cake, but on how he handles the alarming pressure of the cost of living over the next two years.

As for The Boys In The Bubble, and in particular the BBC, a period of silence on this tedious Toytown witch hunt is long overdue.

Coming out of anonymous junior staff in Downing Street to complain about being cheated after work is a sign of desperation, especially as the Prime Minister was nowhere to be found when they were vomiting in the flowerbeds.

It’s time to grow and move forward. What if some people were on each other’s knees?

Most of us think it’s all over. It is now.

Best Hulu movies to watch before they ...