City of Faith and Fury “Premiere in July

New original CNN series “History of the Sitcom” and “Jerusalem: City of Faith and Fury” premiering in July

History of the sitcom, producers of The story of the end of the night, Premieres with consecutive episodes on Sunday July 11

Jerusalem: the city of faith and wrath, narrated by Golden Globe-winning actor Ewan 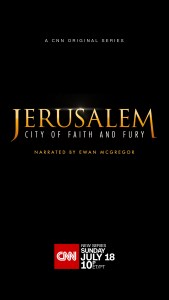 NEW YORK – June 9 2021 CNN Original Series is expected to launch two new docuseries in July; History of the sitcom premieres with consecutive episodes on Sunday, July 11 at 9 p.m. and 10 p.m. ET / PT, and Jerusalem: the city of faith and wrath Sunday July 18 at 10 p.m. ET / PT.

Executive producers for History of the sitcom are David Brady, Kate Harrison Karman, Bill Carter and John Ealer for Cream Productions, Amy Entelis and Lyle Gamm for CNN Original Series. After the premiere, the series will air regularly Sunday nights at 9 p.m. ET / PT on CNN.

Jerusalem: the city of faith and wrath, produced by Blackfin, is a six-part series that tells the story of one of history’s most controversial cities, through six epic conflicts that have shaped and defined it. Narrated by Golden Globe-winning actor Ewan McGregor, the docuseries explore how a barren small town with no natural resources became a place of pilgrimage for three of the world’s most important religions, while examining how three thousand years of conflict led directly to the struggles. today. Spanning from Biblical times to the Roman Empire through the Cold War, and examining the stories of King David, Cleopatra, Saladin, TE Lawrence and more, the series brings the “City of God” to life like never before.

The first episode, “The Kingdom”, traces how King David conquered and claimed Jerusalem from the Jebusites as the capital of the United Kingdom of Israel, setting the stage for centuries of conflict to come.

Executive producers for Jerusalem: the city of faith and wrath are Geno McDermott, Jordan Rosenblum and Shan Nicholson for Blackfin, Amy Entelis and Lyle Gamm for CNN Original Series. The series will air regularly Sunday nights at 10 p.m. ET / PT on CNN.

History of the sitcom and Jerusalem: the city of faith and wrath will broadcast live to subscribers on the day of their premieres via CNNgo (on CNN.com/go and via the CNNgo Apps for Apple TV, Roku, Amazon Fire, Samsung Smart TV and Android TV) and on the CNN Mobile Apps for iOS and Android. Before the first broadcast, from Friday July 2sd the episode “Holy War” of Jerusalem: the city of faith and wrath will be available on demand to subscribers via cable / satellite systems, CNNgo platforms and CNN mobile apps. Episodes of both series will be available the day after their first on-demand airing via cable / satellite systems, CNNgo and CNN mobile apps.